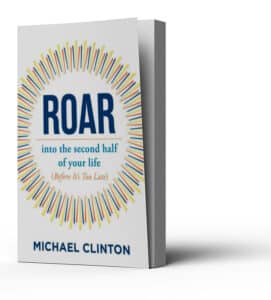 In his book “ROAR Into the Second Half of Your Life (Before It’s Too Late),’’ Michael Clinton insists he gets seven hours of sleep nightly.

Impossible, you think after interviewing him; you wonder how, in under 17 hours daily, he accomplishes so much, is so knowledgeable, and is friends of, acquainted with and family to so many people.

For example: Clinton will turn 70 in August 2023; in May 2023, he plans to undertake the Tenzing Hillary Everest Marathon — a hike to the Mount Everest Base Camp (alt. 5,300 feet) and a marathon run down. It’s considered one of the highest and toughest marathons in the world.

He says that if one is nearing the age when they won’t be able to run as their main source of exercise, learn to swim.

When Clinton put out feelers, via word-of-mouth and his monthly newsletter, for stories of people who had reinvented themselves in middle age and later, for use in the book, he turned down the banker who became a banking consultant.

“I wanted to talk to people who totally flipped the script of their careers and their lives.’’
Like the corporate executive who quit to become a lifeguard at 62.

Clinton didn’t stray too dramatically in his reinvented life: a native of Pittsburgh, he had a “splendid’’ career in New York publishing, rising to become the president and publishing director of Hearst Magazines. To drop a name, he was on the team that launched O, The Oprah Magazine. Now he’s special media advisor to the Hearst Corporation’s CEO.

Clinton is also an author, an avid traveler (124 countries); a marathon runner (on seven continents), a private pilot, a public speaker/seminar leader, and part owner of a vineyard in Argentina. He also founded a nonprofit organization, holds two master’s degrees and has a list of goals that doesn’t get shorter as he gets older.

No place for ageism

So, when this media veteran says the American way of selling and promoting is “shameful,’’ he knows from what he speaks: “For an industry that prides itself on embracing diversity, it is shameful that institutionalized ageism exists within the advertising world.’’

He says that the youth-obsessed advertising and media worlds neglect the 55-plus American at their peril, and then plucks from his computer this statistic for proof: 70% of the country’s wealth is held by the 55 and older population.

“That’s $92 trillion. There are 117 million Americans who are over 50. I did some checking: If you took the 50-plus U.S. population and you mapped it out as a country, it would be the third largest economy, by GDP, in the world,’’ Clinton says.

Statistics and news stories tell us that people beyond the traditional time of retirement (a word Clinton hates, by the way) are starting over, accomplishing plenty and are capable of spending great sums of money. Clinton says a recent survey showed that in 2019, 25% of new entrepreneurs were aged 55 to 64, double the figure of 2009, and bound to increase in the next 10 years.

On the day that Clinton spoke to Rethinking65.com, the New York Times published an obituary of Frances Hesselbein, 107, the former head of the Girl Scouts of America. The organization, floundering when she assumed its national leadership at 61, regenerated and flourishing under her stewardship. Upon her retirement at 75, Hesselbein co-founded a non-profit leadership foundation.

So, if age needn’t hold back re-inventers, what’s preventing us from seeing a greater number of older faces in TV and print commercials — aside from the ads selling pills and at-home monitors?

“A study just done by the A&E networks found that of 20,000 television commercials, one in 10 faces was over 50, one in 25 was over 50 and female, and I won’t even go into the numbers on diversity representation,” says Clinton. “In the advertising and media worlds you don’t have diverse representatives around the table: Most of the creative people and most advertisers who are creating are under 40.”

“It was the same way when you didn’t have women at the table, so men made the decisions about what women wanted. Then the women said, ‘Wait a minute, I should have representatives around the table to give a more authentic voice,’ and the same goes for Black and Hispanic faces. There is an enormous amount of catching up to do.’’

Advisors must adapt, too

The financial services industry also has some catching up to do, Clinton said.

“For starters, most financial advisory firms offer the same thing: They offer services for what they are selling — stocks, bonds, annuities. The smart FA firms are the ones that are beginning to differentiate themselves by bringing a focus on longevity and their clients.

“I’ll give you an example: I went to Dallas to speak to the high-net-worth clients of a financial advisory firm. The clients have made money, sold the business and they keep asking their financial advisor, ‘What should I do with the rest of my life?’ and some were told, ‘That’s not really our job.’ But some advisors thought, ‘Oh, wait, maybe we can offer insights to our clients.’”

So, at seminars about the new longevity, Clinton told these advisors that it was indeed their job to help guide clients to a meaningful and productive life after conventional retirement age. He calls this approach being “longevity smart’’ because “their clients are very interested in the subject.’’

To get started, “One of the approaches is to step out of the mindset of self-imposed ageism. That takes a daily practice of “Reimagination”…. To be conscious of negative thoughts… words, images that come to you during the day that allow you to fight the cues that create self-imposed ageism and replace them with more positive images that support future possibilities,” says Clinton.

“In a practical sense, that means launching a business in your 60s, going back to school for a degree or certificate or deciding to train for your first marathon. Get rid of age appropriate and replace it with person appropriate.”

Only a pro who’s passionate about his subject can convert 204 pages of information from a book into a snapshot of how one can ROAR (Reimagine; Own; Act and Reassess) into the second half of life. Here are a few examples:

Clinton shares several examples of older people in powerful roles. “Look at Bob Eiger (71); he just got called back to Disney (as CEO). I think that we are seeing more people who are not talking about the gerontocracy any longer. Look at (Joe) Biden (80). If you step back and forget about the political beliefs, you see he has been responsible for an enormous amount of legislation.”

“Look at Senators and Congressmen (Nancy) Pelosi (82); Mitch McConnell (80); Maxine Waters (84); Chuck Grassley (89) — very effective elected powerhouses — they’re experienced, they know the routine, they bring a lot of confidence and ability. We’re seeing more and more of this: Instead of being pushed out into their later years, these people in their 70s and 80s into their 90s are doing amazing work.’’

But not all of us are gifted politicians or robust marathoners. What about taking significant but smaller steps towards ROAR?

“You adapt and you go into the new normal. If there are cognitive issues, there are many, as I understand it, new digital tools to help you sharpen your cognition, your neuroplasticity.’’

When Clinton hears about a recent event held at Stanford University about brain health and hand-held electronics that can improve memory and focus, he asked, “Was that the Longevity Summit?’’ Indeed it was.

“I was supposed to tune into the summit, but I was finishing my piece for Esquire and couldn’t make it,’’ Clinton says, a rare occasion when he wasn’t in all places at all times. Turns out he had met recently in New York with Laura L. Carstensen, founding director of the Stanford Center on Longevity, an organizer of the summit.

As for the less agile or financially secure who might consider a restart, Clinton said the choice one makes depends on certain factors. “First, it depends on what you want to do. If you have to find a new fitness regimen, you can do that without money.”

“Somebody who wants to go back to school might say they don’t have the time, or the money, but I would argue time is what you make of it, and there’s a lot of money around for people over 60 for course work,” he says. “Some states allow you go to college for free. If you have an income under a certain level, you can attend state colleges for free.”

One interviewee featured in his book was so determined to get her master’s degree that she sold her house to raise the money and moved into an apartment, which she shared with a roommate. Clinton said the Small Business Administration can lend help for new ventures, and there are venture capital firms such as Prime Time Partners that service the 50-plus market.

“Part of it is about doing homework into funding if you don’t have your own money. Fifty-seven percent of all small businesses are owned by people over 50. There is a whole new infrastructure that is emerging among the 50-plus who are launching their own businesses.’’

Clinton said that as women forced change in America through the women’s movement of the 1970s, he sees a social revolution happening now, fueled by citizens in the second half of life.

“People will force the change; by sheer numbers they will force change. It’s like a fast-speeding train.’’

“ROAR Into the Second Half of Your Life. Before It’s Too Late,’’ by Michael Clinton. Published by Atria Books/Simon & Schuster.

In a four-decade career in journalism, Eleanor O’Sullivan has reviewed many books on best practices for financial advisors, has written for Financial Advisor and the USA Today network, and was the movie critic for the Asbury Park Press.

The largest third-party certifier of women-owned businesses is recognizing several financial services firms with an award.

A showdown is coming that threatens to throw the global economy into turmoil.