Shakespeare was his first love; now his love for advising keeps him from retiring. 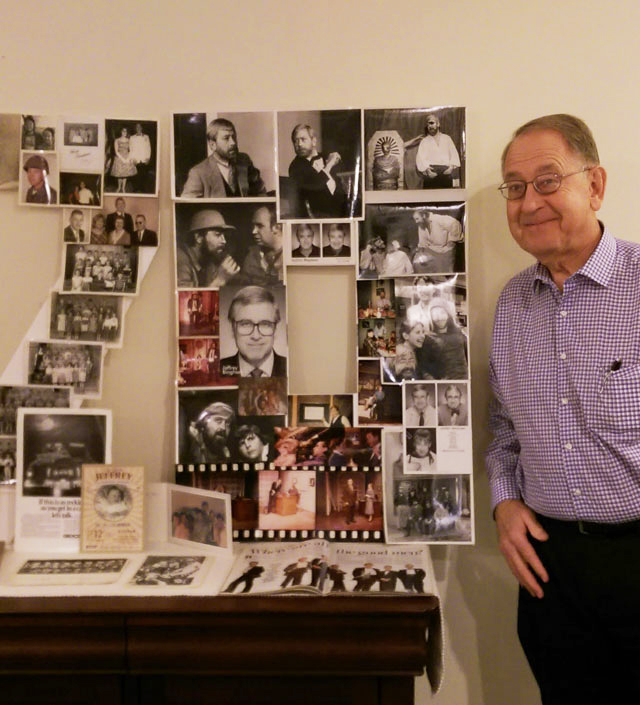 Editor’s Note: This article is part of a series Rethinking65 is doing on older advisors who are continuing to work. You may also be interested in reading our articles on Don Rembert and Dick Wendin (both 82), David Demming (74) and Minoti Rajput (70). Want to suggest an advisor for the series? Contact Editorial Director Jerilyn Klein.

Jeffrey Bingham has the perfect retirement set-up: a hammock just made for reading a great book, in a quiet rural New Jersey setting, while the aroma of his wife Veronica’s cooking wafts in the breeze and their dog, Nola, snoozes in the shade.

But at 75, Bingham isn’t quite ready for that scenario.

Still active as a wealth management advisor — holding CFP, CLU and CASL certifications — at Holistic Financial Services, in Wyomissing, Pa., Bingham is working on his five-year plan toward retirement, which should get him into the hammock by age 81.

His company works under the umbrella of Financial Growth Partners and the Guardian Life Insurance Company of America.

For most of the year, Bingham puts in a Monday to Friday, 9 a.m. to 5:30 p.m. workday. In fair weather months, he packs it in early on Fridays to head out to the family cabin in New Jersey.

Does he keep working for the money or for the love of the work?

Bingham has had the unusual luck of finding two careers that he has been devoted to: first, as a professional actor, doing largely off-off and off-Broadway and regional theater (with a horror film thrown in now and then) and now, as a financial advisor.

He says that he enjoys working with both individuals and families, and has clients who are the children of his older clients — the oldest being mid- to upper-70s, the youngest 25.

“Dead broke and owing money,’’ and newly married to a woman with a child, Bingham began his career in financial services 30 years ago at a mutual fund firm. He learned he was a good listener who could help clients “decide where they wanted to get to, and I could put stuff together for them which went very well — and I then did self-study to get better.’’

A job with State Farm Mutual followed, but Bingham left after six years. Having married Veronica, who had an 8-year-old daughter (Natalie), Bingham needed a job that was both good for his wallet and his state of mind.

Enter, in 2009, First Financial Group, under the umbrella of Guardian Life.

“(First Financial) put together the tools and a philosophy to work with clients that addresses all the things that I think are needed: It was a protection-first approach.

“I’ve been working this way ever since, and it’s a much more satisfying way to take care of clients,’’ Bingham said.

He tells the story of the client who worried that her husband was under-insured (he subsequently died of throat cancer) and then brought her father in to “see what this blankety-blank financial guy will do for his daughter.”

“I said I was there to help protect them and he went through everything with me, and then said, ‘Would you be willing to work with me and my wife?’ We became best friends!’’ Bingham says.

As for a mentor, Bingham found one simply by listening to the right person. It was 1993, the year he began his career, at the former First Investors Corporation in Woodbridge, N.J.

“When I started with First Investors, we had an open cockpit and rows of tables and we each sat at the tables. That allowed me to listen, and two rows behind me, was Patrick, who was the number one rep in this nationwide company,

“I got to hear how he talked to his people, and he was very open to me asking questions, So, I learned from the folks around me. My curiosity helped: If I didn’t know something, I found out about it. From that point on, in a few years I became the person they came to. If I don’t know, I’ll say  ‘Go find out and tell me.’ I keep on learning,’’ Bingham says.

Bingham was born and raised in Klamath Falls, Ore., the son of a restaurant family. At 17, he didn’t know what he wanted to do or how he could get paid, but he knew what he didn’t want: a career in the restaurant business. Upon high school graduation, in 1964 and during the Vietnam War, his father insisted that Bingham go into the service.

“Out of pure rebellion, I joined the Marine Corps because Dad had been in the Army.” Then, “after surviving boot camp, which was awful, I knew the one thing I didn’t want to do was food service. So, what did they do? They made me a baker. I put that into the practical joke department!’’

When Bingham’s outfit arrived at Chu Lai which housed a Marine Corps Division and an Air Wing on the site of a former Viet Cong stronghold, he spent his time doing what he had hoped he could avoid. “I did not get involved in any combat at all. I am not sure I would have survived if it hadn’t been for being a baker.’’

The Power of Shakespeare

After getting out of the Marines and recovering from tuberculosis, Bingham was indecisive: He toyed with attending law school (“To shut my Dad up’’) but with money from the Veterans Administration, he traveled abroad and landed in a kibbutz in Israel.

Back in the U.S., he enrolled in the University of Oregon, majoring in English and minoring in psychology, with the goal of teaching in high school.

Enter Shakespeare, whose works have been known to alter career paths.

“Becoming an actor was a total accident; it was another form of what I had not planned to become.”

An honors class in Shakespeare led to playing Claudius in “Hamlet’’ in a college production, which brought forth a feeling of euphoria that surprised Bingham.

“When I did it before the class, every atom tingled in me, I came alive. I heard my cue, and the work crescendoed and grew; I’d never felt that before.’’

He “dropped everything to act and take every class and see every play,” then “ran away to the big city’’ — New York. He became a member of a traveling theater group, attended workshops, did commercials, studied theater in London for a year, and acted in regional theater in works such as “The Normal Heart.’’

Bingham then worked “in a perfect gig for a money job’’ — with a publishing company — because it allowed him to audition and take acting jobs, as long as he made up the hours. “Things were going very well and I was getting more and more work, but then I met Veronica, who had Natalie, 8 years old, and that killed the theater career. I had to quit because I was responsible for a family.’’

In 1993, Bingham was hired for the more lucrative job at First Investors Corporation, and he discovered that he thrived in financial services. In 2009, he joined First Financial Group in Lancaster, Pa.

Bingham says the financial industry today is more “about me than the clients,’’ and about “putting the client on a path to a product and rates of return.

“Most of it is based on turnover; the whole structure is set up for getting new people in. It’s not about taking the time to see what is going on with the clients. The problem is, no one can guess the rate of return. Markets have two guarantees: One, they‘re going up, and two, they’re going down. And we don’t know when.’’

He says the important conversation advisors should have is not about greater returns but about how “to get dollars onto your balance sheet that will stay there. A good way to do that: savings.”

“More attention should be paid to protection, making sure that folks, when something goes wrong, have something in place.’’

In the if-he-knew-then department, Bingham says he would have chosen to work from the beginning with a company that provides the tools that Guardian offers.

“I did not make the best moves but at the time, they seemed right. Experience is a great teacher, but that means you have to make mistakes along the way.’’

Bingham says financial services is a career in which “many are called and very few succeed,’’ and he applies that rule to all who enter, including women.

“I think they feel there is not prejudice against them. They may have issues that I am not aware of, but when we get together, I see women who are very successful at Guardian. They are looked to as mentors and resources just like other FAs, and they do it very well.’’

Speaking of equality between genders, Bingham says “I don’t cook; I eat. That’s because I come from a restaurant family. But when we have guests at the cabin, Veronica does the prep and I do all the clean-up.’’

Besides long weekends, Bingham takes the two weeks off before Labor Day to spend at the cabin with Veronica and where their daughter, Natalie and her family join them. The hammock beckons.

“When I close up shop for the day, I don’t do any work; I don’t check my email and I don’t get involved in the business at all.’’

Bingham’s five-year plan to reach retirement includes finding his replacement. “I’m looking for someone who is comfortable working this way. I’d like to mentor and bring them up, and be co-equals, and then turn my practice over to them. I don’t want to leave my clients in a lurch.’’