New legislation can make LTC a bit more cost effective for clients with defined contribution plans but won’t help everyone needing these services.

Of the many expenses that your clients will face in retirement, few pose greater uncertainty than the need for long-term care.  Will a particular client need this type of care?  How much will it cost?  What can be done to control the cost? A bill introduced in the House mid-March, The Long-Term Care Affordability Act (H.R.7107), offers several good provisions could potentially make it easier for some clients who’ll face the burden of long-term care – which could cost nearly six figures per year.

At $260 per day for a shared room, the cost of one year in a nursing home is estimated to be $94,900 nationally. True, this is an average and may not reflect the needs of a client in higher cost areas such as Alaska ($1,040) or lower cost areas such as Texas ($149), but it can serve to point out the obvious: Care is expensive, and the cost is an issue that needs to be addressed.

Many taxpayers view retirement planning and long-term care as two completely different silos – if they’re even thinking at all about long-term care. Providing a client with a plan to grow wealth will accomplish nothing if that wealth is not protected.

At a cost of $94,900 per year, a three-year stay in a nursing home will cost $284,700 in today’s dollars. At an inflation rate of just 5%, in ten years the cost would balloon to $463,746.30 — for one person. What if both partners in a relationship need care? This level of expense is likely to spend down the majority of assets for all but the wealthiest clients.  The result of this will be increased emotional and financial stress for the family, in addition to the new physical and or mental needs of the client.

Another Source of Funding LTC

H.R.7107, sponsored by Reps. Ann Wagner (R-Mo.) and Debbie Lesko (R-Ariz.), can help change that segregated thinking. It would allow individuals to withdraw funds from their 401(k), 403(b) and IRAs to pay for long-term health care insurance without paying income tax on those distributions

A document on Rep. Wagner’s website notes that individuals from across the income spectrum would be able to take advantage of this tax benefit and that, according to the Joint Committee on Taxation, over half of households contributing to retirement accounts have income of $100,000 or less. According to Congress.gov, Toomey and Wagner’s bills are identical.

Like the Qualified Charitable Distribution (QCD) rules that apply to IRA accounts, funds paid from a qualifying plan for the purpose of long-term care are used in the determination of meeting a Required Minimum Distribution (RMD).

This is one area where an advisor can add some value if this bill becomes a law. Just as you would want to explain QCD options to a client, covering how using part of their RMD amount to pay for a long-term care premium can improve a client’s financial position.

The proposal also outlines a new reporting requirement for the issuers of long-term care insurance.  They will be required to provide an annual statement to the IRS as well as a copy to the taxpayer by January 31 of the following year showing the amount paid during the year and to identify both the owner and insured of the contract.  This appears to be similar to the existing reporting requirements for retirement accounts, but the final form is yet to be determined.

The reporting would be on the insurance company but the advisor (who might also be the insurance agent placing the LTC policy) could certainly add value by reviewing the insurance policy during the application process since it is easier to ensure that the tax reporting will be correct rather than to ask a custodian to correct it after the fact.

How the Legislation Falls Short

While H.R.7107 is a good starting point for the discussion, limiting this benefit to those that can qualify for an LTC policy will leave many paying out of pocket on uneven footing such as those who don’t medically qualify for a policy.

According to an industry trade group, as many as two in 10 applicants in their 60s can expect to be declined by an LTC provider and six of those same 10 will not qualify for the best rates.

Also at a disadvantage would be individuals who, based on their age, would have to pay more than $2,500 for a long-term policy. For example, a 65-year-old could expect to spend $191.79 a month for a policy covering $150 per day lasting for only two years with an inflation adjustment. Given the national need of $260 per day, this leaves a coverage gap of $110 per day. 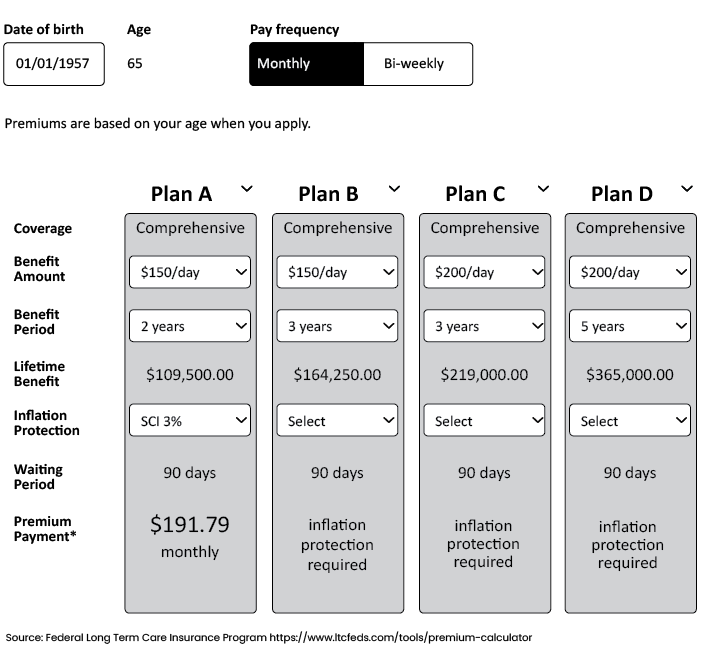 Rather than making the tax-free amount solely dependent on paying a premium for an insurance policy, allowing taxpayers to exclude a portion or all long-term care expenses from taxable income would be a more equitable policy.

We also see that the bill limits the amount of the tax-free distribution to the lesser of the premiums paid or $2,500 and that only one taxpayer for one insured individual. For a married couple this would mean that one person cannot pay for both themselves and their partner in the same year and exclude the income for both policies.

In addition, H.R.7107 lacks portability. Portability is the ability for one spouse to use the other spouse’s available amount of long-term care insurance. So, the legislation will also impact couples who have very different premium needs even if their combined premiums are equal to or less than the $5,000 exclusion they’d have available if they were not married.

There is a lot to like in this bill although some improvements will be needed to provide the tax savings to a wider group of taxpayers. It’s never too early to start talking about the concept of long-term care and how to pay for it. Your clients deserve your best and that includes a discussion of this bill.

Share
Linkedin
Twitter
Facebook
Email
Previous article
You Can Change Your Views of Aging and Improve Your Life
Next article
Hay is for Horses: How To (and Not To) Talk to Senior Clients