In his new book, Arthur Brooks shares the secrets of creating a rewarding “back half” of life.

Since the days of Dale Carnegie, who helped readers win friends and influence people, successful self-improvement books have appealed to the right niche at the right time.

“From Strength to Strength,’’ by Arthur C. Brooks, former president of the American Enterprise Institute (2009-2019) and now a professor at Harvard, aims at the workaholics who reach middle age and wonder “Is this all there is?’’

Brooks spends about 60,000 words advising aging Type As how to scale back and create a “back half’’ of life that is productive and spiritually rewarding.

His book debuted in first place on the March 6, 2022 New York Times’ best seller list in both print and ebook formats, and remains in a top spot at press time.

Obviously, “Strength to Strength’’ has found its audience, some of which may know Brooks from his “How to Build a Life’’ column for The Atlantic magazine, and his dozen books. 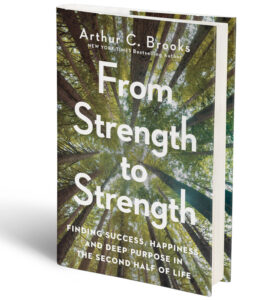 In 2012, at 48, Brooks had an epiphany that seven years later, compelled him to quit his job as president of the AEI think tank, peel away extraneous material things, reignite friendships that had faltered because of his excessive work hours, and start exploiting his newly developed “crystallized intelligence’’ — wisdom and knowledge.

“None of these things came easily, or even naturally. They went against my striverly urges. Sometimes, we must fight our natural instincts if we want to be happy,’’ Brooks writes.

The epiphany came on a night flight from Los Angeles to Washington D.C.; an elderly man sitting within earshot of Brooks was bemoaning that nobody needed him anymore. Brooks was stunned to see that the man, in his 80s, was world-famous for his courage, patriotism and accomplishments.

Fearful he would look back in regret, too, Brooks began researching this book, while curbing his “striverly’’ instincts. He learned to accept that aging changes the brain so that our “fluid intelligence’’ — “our ability to reason, think flexibly and solve novel problems’’ declines after 40. Crystallized intelligence — “the ability to use a stock of knowledge learned in the past’’ — becomes the dominant intelligence in older people, Brooks says.

The bad news of Brooks’s research? “Financial professionals reach peak performance between the ages of thirty-six and forty.’’ Musicians? In their 30s, his research found and his life confirmed: His first career was as a French horn player in ensembles in the United States and abroad; at 31, he quit performing because his playing had deteriorated seriously. He became a social science researcher and college professor, began writing books and giving speeches, and then wound up at the American Enterprise Institute.

He says with age, “people are better at combining and utilizing complex ideas; they get much better at using the concepts they know and expressing them to others.’’

Improving the “Back Half” of Life

So what did Brooks do to change his “back half’’ of life, and what does he advise readers do?

Beyond accepting that one kind of intelligence declines and another improves, and finding the right pursuit for the new strength, examining one’s life is in order.

Stop “objectification,’’ he says: “(We) reduce (people) to one or two enviable characteristics, such as beauty, money, or power.’’

Job success, money, power and prestige are “the success’’ addictions Brooks says readers must kick. He disagrees with Malcom Forbes, who said, “He who dies with the most toys wins.’’ Brooks, who believes St. Thomas Aquinas was right when he said temporal goods are insufficient for happiness, says to whittle down possessions.

He suggests pondering one’s death and deciding if you want to be remembered for “resume virtues’’ or “eulogy virtues.’’ Brooks says better to build up eulogy virtues which are “inherently rewarding.’’

His well-traveled advice includes not smoking or abusing alcohol, keeping a healthy weight and exercising, attaining a good education, and creating real not “deal’’ friendships.

Brooks visits India yearly and embraces the Indian theory of ashramas —how to transition through middle age in happiness and enlightenment. He advises readers to “start your vanaprastha’’ (spiritual growth).

“For those who embrace faith at this stage, it is a joyful epiphany.  Mountains of research show that religious and spiritual adults are generally happier and generally suffer less depression than those who have no faith.”

Brooks cites the teachings of the first-century convert to Christianity, Saint Paul: to recognize your weakness, take risks, be willing to fail and use failures as a source of human connection. Friendships will strengthen from showing vulnerability and defenselessness, he writes.

The philosophies and wisdom of women are in meager supply in the book: Brooks refers to Gail Sheehy’s best-selling book about midlife crises, “Passages’’ (1974).  Several other women authors are mentioned briefly, but the male viewpoint and experience, Eastern and Western versions, dominates.

Close to home, Brooks provides anecdotes about his father but has no comments about his mother, aside from the information that she was a “professional painter.’’

He dedicates the book to his wife, Ester Munt Brooks, calling her “my guru.’’

Munt, born in Barcelona and a lapsed Catholic, has since returned to Catholicism. Brooks converted to Catholicism in his teens; he and Munt have made the spiritual Camino del Santiago walk in northern Spain, and they attend Mass daily.

The Forces of Happiness

The book’s strong encouragement of the spiritual and religious as the way to a rewarding “back half’’ of life may not suit some readers. But Brooks offers ample secular advice, too, all of which he says he follows:

“The forces that are most responsible for happiness: my faith; my family; my friendships; and the work that I am doing that is inherently satisfying, meaningful and that serves others.”

“From Strength to Strength: Finding Success, Happiness and Deep Purpose in the Second Half of Life’’ by Arthur C. Brooks. 252 pages. $27. Portfolio/Penguin Books.

Eleanor O’Sullivan is an award-winning journalist.

Kidney experts estimates that 37 million people in the United States have kidney disease, but around 90% do not know they have it.

Crypto executives are at the Davos gathering seeking to encourage faster adoption of the technology, despite the crypto crash earlier in May.

Stanford University is getting $1.1 billion, its largest gift ever, for a new climate change school.

A proposed rule would eliminate delays faced by people who enroll in months after their 65th birthday.

But it's not just Covid causing a growing gap in life expectancy between the U.S. and other countries.