In his latest of many second acts, Harlan Rector compiles a book series honoring positive actions and life-changing events.

By the time Harlan Rector reached 86, he had accumulated enough second acts for several people.

Born and raised in St. Louis, the author, artist, voiceover talent, songwriter, painter and producer launched another career in 2020 by becoming editor, with Edward Mickolus, of a series of spiritual books, “I Matter … Finding Meaning in Your Life at Any Age.’’

“The books feature essays honoring some positive action or event that changed a life or its direction, and encourage the reader to chronicle her or his own recollection, as well,’’ Rector said.

In the series’ first book, “I Matter: Finding Meaning in Your Life at Any Age,” Rector (www.harlanrector.com), now 87, writes about the magic of his boyhood during the Depression; about producing a CD anthology of “true stories about how God works in the lives of His People’’; and how, when on a retreat in Connecticut, the prayers of other attendees helped him overcome a painful injury. That essay appears in the chapter “The Age of Reflection: Retirement.’’ 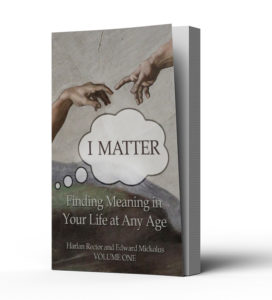 “This essay is in (this) chapter because I retired from my old self long ago. Since then, God has given me opportunities to use my creativity for His Glory. Now, at age 86, I can’t wait for the next time I’ll step out fearlessly knowing I matter to God,’’ Rector wrote last year.

Each volume —the second is titled “I Matter Too!’’ and the third, “I Still Matter” — include chapters on life’s benchmarks, such as childhood; the responsible years of adulthood; work and career; marriage and children; and the reflective age of retirement.

A Circuitous Route to Editor

Rector took a circuitous route to his current role: He was art director at a large advertising agency in Detroit; later became a voiceover talent for companies such as Honda, Chevrolet and Prego and for the History Channel, in Los Angeles and New York; and then was a radio producer of spiritual CDs.

Rector and co-editor Mickolus, who had a 30-year career in the CIA, live in St. Augustine, Fla., where many of the books’ essayists also live.

The inspiration for the books came to Rector on the golf course.

“I got a hole-in-one and after that, I asked “God, what do you want me to do?’ A voice in me made me want to write a book called ‘I Matter,’ and after thinking about it, I had in mind exactly what it would be: six chapters on each stage of a person’s life and people writing positively about positive things that happened in their life,’’ Rector said.

Among the contributors are Dee Wallace, the 73-year-old actress whose 263 movie, TV and stage credits include “E.T. the Extra-Terrestrial,’’ “General Hospital,’’ and the upcoming “Campfire.’’

Wallace writes about a fifth-grade teacher who came to her defense when she mispronounced a word in class.

Other contributors include film, theater and TV actor Patrick Collins (“The Jeffersons,’’ “Law & Order,’’ “Man on a Ledge’’) who was a monk and began volunteering as a youth minister the year he became an actor. Collins writes about forming a theater group and class on creative writing, public speaking and conflict resolution in a maximum-security prison.

But the lion’s share of the series’ essayists are not publicly celebrated. Those of retirement age worked in health administration, film production, education, accounting, non-profits, law enforcement, intelligence contracting, business strategizing, investment advising and corporate America. One contributor was a career Naval officer.

Their common thread is a zest for life and keeping active and involved in the second half of life. Most volunteer, work parttime, travel and have busy personal lives.

In “The Age of Reflection: Retirement’’ in Volume 2, pianist and writer Sheila Weinstein, 83, writes about overcoming society’s stereotyping of the old.

“My plan is to stay the constant mother, wise grandmother and caring friend, to be lovingly remembered, not as a nuisance over whom someone will breathe a sigh of relief when I slip off the planet.’’

Weinstein’s list of goals includes to “remain creatively alive; to finish the work I have begun and to do the next thing I want to,’’ and “to befriend the fear of aging and dying, making it serve me by helping me to live in this moment, and the next and the next.’’

Rector used a famous section from Michelangelo’s painting of the Sistine Chapel ceiling on the first cover; he illustrated the second cover, revising the original cover to show a Black hand reaching out to a white hand. He also illustrated the third cover.

“Again, it will show God’s hand and a man’s hand, the hand of a working man because the working man matters. The thought occurred to me, if we have a fourth book, the cover will have God’s hand and nobody else there,’’ Rector said.

Rector said he didn’t have an answer as to why American society shuns its old and infirm, an issue that essayist Weinstein discusses.

“It’s a good question and I don’t have a good answer. The books are a counterweight to the attitude that the old are useless. I learned to understand that I don’t claim to think too clearly about anything unless God has helped me.

“My whole careers, as art director and voice over, I’ve always been aware of good in my life, but I never paid Him much attention early on. But when I started doing voiceovers and I was totally in over my head — I knew nothing about the business — I made a pact with God: ‘You will have to take over my career; otherwise, I don’t know how I will get through it.’’’

Rector said he thought younger people in general do not worry about “mattering’’ because they have healthy egos.

“I think when you are younger, because of your ego, you feel ‘I matter because I am this guy, I’ve got this great job, and look at me!’

“But as you get older, you wonder ‘Was I really something worthy of mattering in anything?’ The closer I get to death, I don’t know how long God will keep me here. But I am on a fast track, I am running as fast as I can.

“I want to do more, but it’s not because I ever cared about applause or lots of merits and awards. The older you get, the more you don’t look for that.’’

Rector said he hoped the “I Matter’’ books would appeal to a wide audience, including those who are not Christian, or even among agnostics and atheists.

“All the stories are not all Christian-or faith based. The incident Dee Wallace writes about had nothing to do with religion. It had a lot to do with love.

“I think that, if people are paying attention, it doesn’t matter how they are spiritually. I think they will get it,’’ Rector said.