The pandemic has had a much bigger impact on succession planning than this multi-family office anticipated.

The COVID-19 pandemic has lit a fire under wealthy business owners to get their succession plans in order and has inspired more of their offspring to take an interest in joining the leadership ranks, according to a recently released survey of high- and ultra-high-net-worth business owners.

More than one third (35%) of the respondents sped up their succession plans because of the pandemic, according to the online survey from wealth manager and multi-family office Clarfeld Citizens Private Wealth, a subsidiary of Citizens Bank. Nearly nine in 10 (88%) planned leadership changes due to pandemic-driven challenges and 66% reported that the pandemic accelerated their plans to retire or sell their business.

A good chunk of the respondents (34%) decided to retire early and plan to leave their businesses to a family member, including spouses, children and grandchildren.

“We know from anecdotal evidence, from clients that they are thinking about succession.”  Jose Reynoso, director of Personal Financial Planning/Advanced Tax and Estate Planning/Trust Services at Clarfeld Citizens Private Wealth, told Rethinking65 in an interview.  “But the degree to which they were, the higher percentage, was a surprise.’’

“COVID, in combination with other things, shed light on mortality and the precarious nature of business,” he said. “(Something) can hit your business at any time; it’s hard to control.” 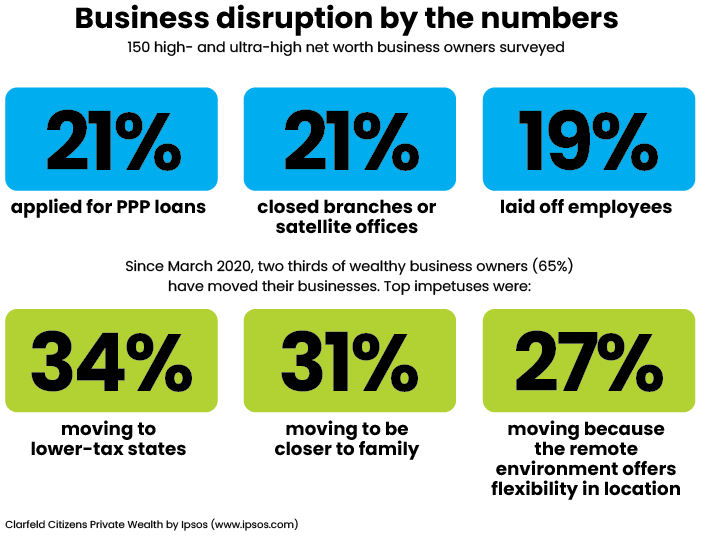 Also surprising, said Reynoso, is that nine in 10 business owners (89%) are confident the next generation will be a successful steward of their business. One in five children or grandchildren (21%) who were previously uninterested in succeeding their predecessors are now interested in taking over the family business post-pandemic, the survey also found.

“To us, it confirms that communication, the convening of meetings, the education seems to be working, perhaps to a higher degree, at least by the evidence of the sample, than we even thought,’’ Reynoso said

The Clarfeld Citizens Private Wealth survey, conducted in July 2021, sampled 150 adult business owners with net worth ranging from $2 million to $10 million-plus and investable assets of at least $5 million. Their business size ranges from 2 to 500 employees.

The survey also revealed some wake-up call statistics for financial advisors. Although more than half of respondents (59%) indicated they were proactively approached by their financial advisors about succession planning in light of the pandemic, business owners didn’t seem to be that receptive to the help. 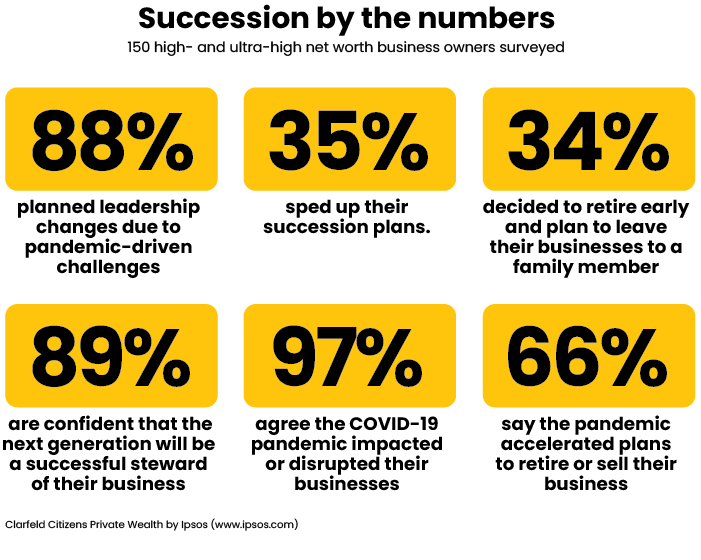 “Business owners need a sounding board across disciplines,” said Reynoso. “It confirms to us, we believe the right thing to do is to go outside the box into thinking about clients’ situations beyond the narrow silo discipline — on investments, or tax, or planning.”

“The message to financial advisors is to think broadly and holistically — this idea of comprehensive, intergenerational thinking that tells us there is opportunity, but for us, also confirms our model is something we need to still be thinking about.”

Among the survey’s other notable findings, one in five respondents applied for Paycheck Protection Program loans (21%), closed branches or satellite offices (21%) and/or laid off employees (19%) during the pandemic.

Since March 2020, two thirds of wealthy business owners (65%) have moved their businesses. The top impetuses include moving to lower-tax states (34%), moving to be closer to family (31%), and moving because the remote environment offers geographic flexibility (27%).

In addition, three-quarters of business owners surveyed see themselves physically moving their business in the next three to five years.’’

What are the issues that wealth managers need to address when a business-owner client decides to move or sell?

“It’s so interdisciplinary,” said Reynoso. “You have to have the expertise to talk about transfers and income taxes, corporate structure and other issues related to entities,” he says, “and perhaps they need a road map or some structure on how to think about it.”

”You must know the psychology of what it means to a client to transfer a business when the business has been another child: It has fed them, it has made them who they are.’’

In addition, “he says, “you must know the psychology of what it means to a client to transfer a business when the business has been another child: It has fed them, it has made them who they are.’’

For one packaged-foods business owner that Reynoso works with, the pandemic, a bout with COVID-19 and the 2020 election results sped up succession plans.

“We had talked about succession, and then COVID accelerated his thinking,” he said, to make some changes by the end of 2020. The client’s business did well during the pandemic, but it was working around the clock to meet demand and the client “battled through” the virus after contracting it, said Reynoso.

Concerns were also raised that the business owner could be negatively impacted by potential tax law changes under President Biden and a Democrat-controlled Congress, said Reynoso. This was namely transfer taxes, income taxes and a reduction in the estate tax exemption.

The business owner agreed to restructure his business so he could be ready to sell, but he wanted to keep control, said Reynoso. “We re-issued shares; it took some work, which we did in partnership with outside lawyers,” and non-voting, non-controlling shares in the business were transferred to a family trust, he explained. “We had to hustle to do this by the end of the year.’’

When the “hard-driving, self-made guy,’’ as Reynoso called him, was advised about selling to strategic and financial buyers, he said “If I don’t get my price I am not going to sell!’’ They met and even exceeded his numbers.

“Ultimately, his trust that was set up for his family upon sale received over $50 million, tax free, and he is doing all right by himself in his personal balance sheet as well,’’ Reynoso said. “We continue to provide structure for his current balance sheet to minimize taxation and to explore goals that he has.’’

A coalition of 25 U.S. states filed a lawsuit seeking to strike down a Biden administration rule allowing retirement plans to consider ESG factors.