They’re catching on, particularly in these markets. But they won’t be right for most of your clients.

Most in the ETF community consider Galvin’s step to be an overreaction and political grandstanding. Nevertheless, almost all in the professional community note these tools are only for short-term traders.

Single-stock ETFs have attracted the attention of investors who are bullish or bearish on a particular stock and are looking for quick returns. These vehicles attempt to enhance daily performance of a stock by using leverage. At some point each day, the terms reset and the leverage is over.

But even short-term traders need to be wary. The vehicles are intended for intraday or at most two-day trading. The reasons for this are that the compounding math of holding daily futures over a week or more is suicidal, and the management fees are among the highest of all ETFs.

Nevertheless, let’s take a closer look at these funds and the underlying stock upon which these ETFs are based.

The company launched the first wave of these leverage ETFs in early October 2021:

Shortly thereafter, these two managers came out with the following:

A number of additional filings have followed but as of this writing, these 16 constituted the selection set in the US. The seven underlying stock are Apple (AAPL), Coinbase (COIN), Nike (NKE), Nvidia (NVDA), PayPal (PYPL), Pfizer (PFE) and Tesla (TSLA). ValuEngine does not rate these new ETFs, but does do comprehensive reports on each of these stocks.

The following table provides a top-level perspective, as of August 28, 2022. 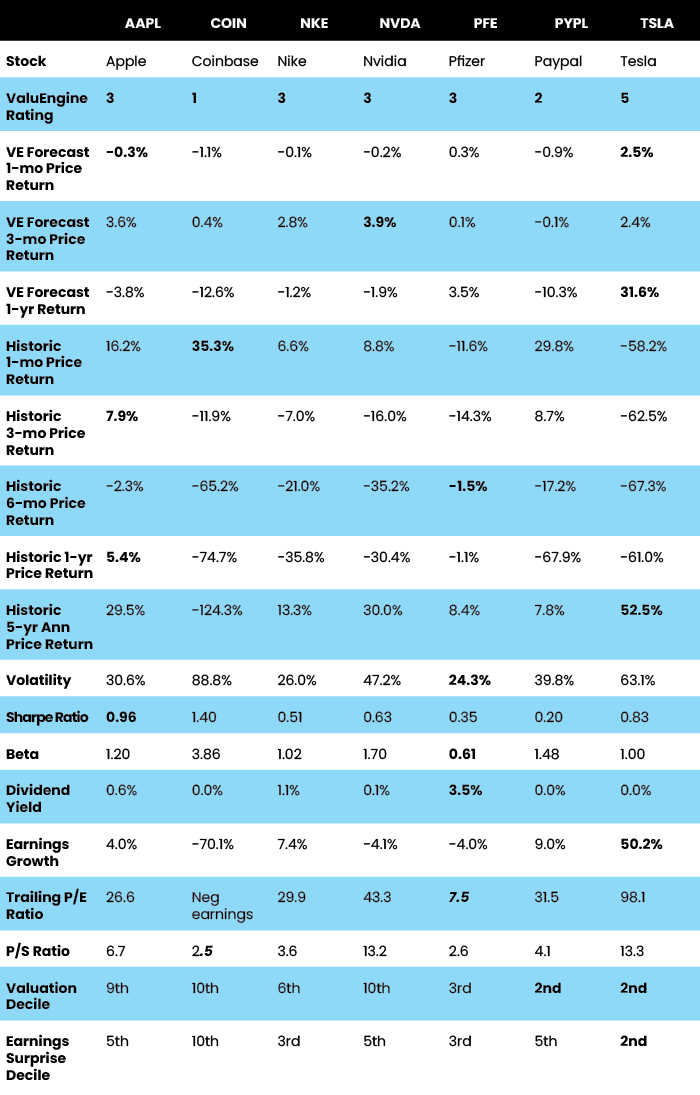 As you can see, Tesla gets ValuEngine’s highest rating of 5 for 6- to12-month year-ahead performance. Despite high traditional valuation ratios, Tesla comes up strong on the model’s valuation decile due to a high earnings growth rate vs. a mammoth relative price decline.

Coinbase gets the lowest rating of 1. Coinbase is the most volatile stock by far with an annualized volatility of 89% and a beta of 3.86, which is almost unheard of. Despite the fact that our models make it a stock that long holders may wish to consider divesting, there is no way I would recommend inverse leverage on a stock with that kind of volatility. The model’s recommendations are for no less than a one-month holding period and generally for holding between three and 12 months, not for a day.

Pfizer is the least volatile stock with a very low beta. It is undervalued by most metrics but only rated as average on both timeliness of investment and valuation by ValuEngine.

Meanwhile, Apple has the best historic Sharpe ratio, but is a relatively neutral investment now, according to our models.

To sum up, holding stock for a day or two makes no sense for most people, including advisors. The leverage that compounds one-day price movements makes these ETFs particularly risky. Unless one is a skilled day trader, it would be wise not to play with explosives.

This article is reprinted with permission. Herb Blank is a senior quantitative analyst at ValuEngine and senior consultant and practice leader in the Global Finesse Product Strategy and Implementations Consulting Practice. He has more than 30 years of experience in financial product innovation and quantitative analysis. Recognized as a pioneer in the exchange-traded fund (ETF) industry, Blank established the first family of ETFs to trade on the NYSE and was a portfolio manager for the fund. He is credited with the product development and launch of iShares, GLD and X Shares. He is also well known for developing construction and maintenance methodologies for Dow Jones Global Indexes.

The SEC charged the broker-dealer firms with violating recordkeeping provisions of the federal securities laws.

The use of these deceptive design practices is on the rise, says a new FTC report that shows what to watch out for.

Bridgewater’s Dalio Expects Stocks To Fall 20% If Rates Rise To 4.5%

The founder of one of the world's biggest hedge funds predicts a sharp plunge in stock markets as the Fed raises interest rates.

Speakers at the SALT event urged investors to stick with their bets, arguing the downturn could become a money-making opportunity.