Advisors should be aware of 14 changes proposed in the Social Security 2100 Act that could complicate planning.

The Social Security 2100 Act has been reintroduced after undergoing a few structural changes in an effort to make it more acceptable to both Democrats and Republicans. If you want to keep up with the changes to Social Security, watch this carefully as could be the bill that is passed as the opening round in the fight to preserve the Social Security system.

The goal of the Social Security 2100 Act is not to be a permanent fix for Social Security. Although you probably won’t hear about this in the soundbites on the news, 12 of the 14 things that could change in this bill, of these changes will sunset in 2027.

This proposal as it’s written now will include a fairly broad set of changes, and not all of these changes are going to affect everyone. Some changes are specific to public servants, disability benefits and how benefits are paid to survivors. A few other nuanced changes only affect specific groups, but there are also some broad changes that most everyone will feel.

Let’s cover each of these changes individually.

First up is a provision that will prevent future reductions to the Average Wage Index. This index is based on the average wages of Americans and it controls multiple pieces of the Social Security system, including the annual formula used to calculate benefits. 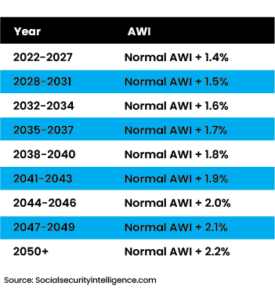 This change will prevent the Average Wage Index from being reduced if we get into a period where wages fall. It would ensure that the Social Security formula will not produce a lower benefit because of wage changes. It lines up with most other Social Security provisions that prohibit an annual decrease. This change would be permanent.

In addition to preventing future reductions to the Average Wage Index, this bill would also have some built-in increases added on top of the normal computed level.

The goal of providing earnings credit for caregivers is to provide retirement compensation in Social Security credits to those who had to leave the workforce to care for loved ones. Whether people are caring for an ill child under the age of 12 or a chronically dependent relative, they can receive up to five years of credit towards future Social Security benefits under this bill.

This provision would expire at the end of 2026.

3. Elimination of the Disability Waiting Period

Under current law, disabled workers and disabled widow(er)s must be disabled for five months after their disability onset date before receiving Social Security disability benefits.

Under the new law, this waiting period would be eliminated, and Social Security monthly benefits would become available beginning with the first full month after the onset of disability. This would expire at the end of 2026, so it would only be effective for those who became entitled to disability benefits between 2022 through the end of 2026.

4. Elimination of the Disability Earnings Cliff

Once that 36-month period is over, if earnings go over the threshold, even by $1, the disability benefit is completely terminated.

The new law would remove the cliff and would simply reduce the disability payment by $1 dollar for every $2 over the limit in much the same way early Social Security benefits are reduced with the earnings limit.

One interesting note here is that the substantial gainful activity level to be used would be the level for blind individuals, which is substantially higher than the normal threshold. This provision would sunset at the end of 2026.

The new minimum benefit under the bill would be 125% of the poverty level for those who worked for 30 years. With the 2021 federal poverty level of $12,880, this change would represent an increase of about $440 per month.

The alternative benefit could not be greater than the full retirement age benefit of an individual who has average earnings every year (as defined by the average wage index), and who turned 62 in the same year as the deceased worker turned 62 or died.

The alternative benefit calculation would be compared to the current-law benefit and the highest benefit would be paid. Any increases to benefits under this provision would be applicable for surviving spouses receiving benefits for months in 2022 through 2026.

7. Increase to Benefits After 15 Years Eligibility 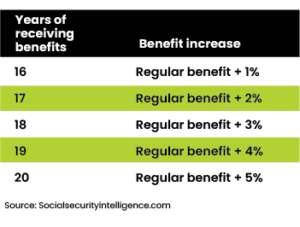 Individuals that have been receiving Social Security benefits for 15 years will receive a 1% increase to their primary insurance amount that will continue to the 20th year, which will result in a 5% increase. In addition, any spousal or children’s benefits paid from someone receiving these increases would also increase.

Currently, there are two provisions that affect those with a pension from an employer where they did not pay Social Security taxes. These two provisions are the Windfall Elimination Provision (WEP) and the Government Pension Offset (GPO).

The Windfall Elimination Provision impacts benefits from an individual’s work history, and the Government Pension Offset affects individuals who would typically be entitled to spousal or survivor benefits.

The change would be to temporarily cease applying these provisions to individuals between 2022 and the end of 2026. At that point, these benefits would again be reduced with the old law penalties. This one could get interesting and create a rush to file for Social Security benefits among public servants.

Currently, the children of retired, disabled or deceased workers who are in school full time up to age 19 receive benefits. This provision would extend eligibility to full-time and part-time students up to 26, but it would expire in 2027.

Currently, grandchildren can receive benefits from a grandparent who is receiving benefits, but the criteria is strict. Generally, both parents have to be disabled or deceased, or the grandparents must formally adopt the grandchild.

The new law would provide benefits to children who are in the custody of a grandparent or other eligible relative for at least 12 months and are receiving at least one-half of their financial support from the relative.

This change would be effective for all eligible children with benefit entitlement for months in 2022 through 2026. In 2027, the current-law rules would apply.

11. Increase of the Taxable Wage Base

A permanent change in the Social Security 2100 Act is an increase in the taxable wage base. In 2021, you only pay Social Security taxes on the first $142,800 of earnings, and anyone earning over that won’t have to pay the 12.4% FICA tax.

However, the new law would put a gap in how this is taxed. If an individual’s income exceeded $400,000 the FICA tax would kick back in.

Those “excess wages,” as this bill calls it, would not be applied to your benefit calculation at the same rate as they currently are. Instead, a new bracket would be added to credit your benefit by 1% of the excess.

12. Change To the Taxation Of Social Security Benefits

Under the new law, there would only be one threshold: $35,000 for singles filers and $50,000 for joint filers. Any combined income over that amount is the amount of Social Security that would be taxable at 85%. 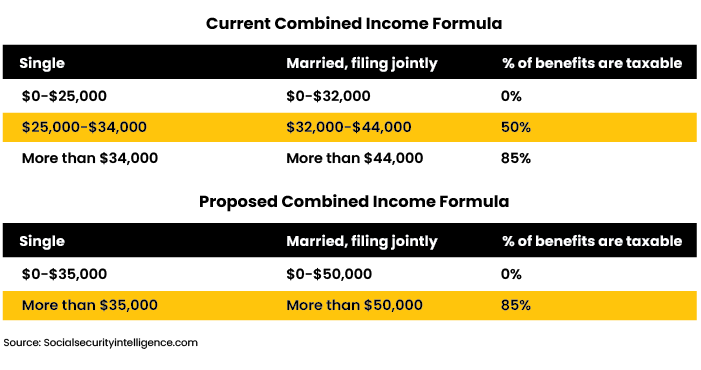 13. Change To the Annual Cost of Living Calculation

Currently the cost of living adjustment is calculated with the CPI-W. This methodology has been criticized for not taking into account that a retiree’s expenses are not the same as a working person. The Bureau of Labor Statistics has kept up with an experimental inflation number for the past several years called the CPI-E. In this measurement they use the expenses of households over the age of 62. When you look at a side-by-side comparison, it’s easy to see where a retiree’s expenses are different.

This is one of the provisions that will sunset at the end of 2026. 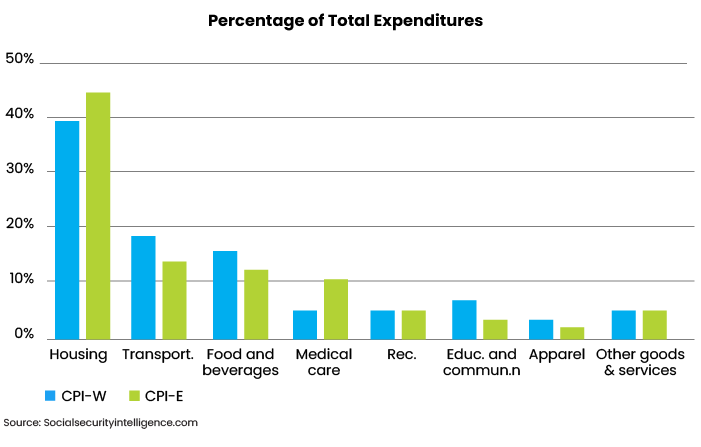 14. Across the Board Benefit Increase

One of the proposals that gets lots of attention in this proposal is the across-the-board increase to Social Security benefits. For this to happen, the Social Security formula will need to undergo a slight change.

The only change is that the top number in this formula will change from a 90% crediting rate to a 93% credit to your benefit amount for the earnings in that range. The estimate is that benefits will increase by an average benefit of $30.

This will mean that everyone’s benefit will be recalculated to add the increase, and then recalculated yet again when this provision expires.

Is the Social Security 2100 ACT a looming disaster for retirement planning?

The five-year life expectancy on most of the changes in the Social Security 2100 act could lead to significant challenges to planning for retirement. These “sunsetting” provisions are a fairly common bargaining chip to gather votes when there isn’t enough support for a full change. This is what happened with the Trump tax cuts and lots of other legislation over the years.

But this bill really sets the scene for a disaster. It makes it incredibly hard to plan your retirement because it would be hard to know what to expect when the provisions were scheduled to sunset. Not only that, but many of these provisions would also require the Social Security Administration to recalculate benefits for payments starting in 2027. Since the calculation process is already challenging for the SSA, having an across-the-board recalculation for nearly everyone who is receiving benefits could lead to massive benefit errors and over/under payment notices.

Hopefully, any law that is passed will include changes that are permanent.

That hardly sounds worth going through all of this trouble, but the thought is that this is the opening round in Social Security reform. With an expiration date on most of these changes, this will likely come up for discussion again. When it does, I’ll be covering it on my YouTube channel, so if you haven’t subscribed yet, you need to.

Devin Carroll is founder of the Carroll Advisory Group in Texas. This article originally was published on socialsecurityintelligence.com and is reprinted with permission. He has also compiled a 2022 “cheat sheet” on Social Security rules.