Executive Trades C-Suite for the Classroom

A Virginia Tech professor who returned to his alma mater to teach business strategy discusses what it takes to make such a career move.

Most, if not all, of you reading articles on Rethinking65 have spent at least 16 years in school. Thinking back over your time in education: Was there one particular teacher or professor who really inspired you and made you want to become the best version possible of yourself? Did that person even make you think that one day, you might like to follow in their footsteps? That was certainly the case for me, and on multiple occasions.

In truth, I didn’t get off to the best start in school. I managed to get in-school suspension as a first grader, still a record as far as I know, and in high school, my guidance counselor crossed the typing class off my course request form because he said I would never go to college. To this day, I still type with four fingers.

But thankfully, Jack Behson, a math teacher with whom I had several courses, helped convince me I was college material. I graduated with honors from Virginia Tech in Finance. Later, when I was pursuing my masters, Dr. Henry Claycamp, a marketing professor at Purdue University, lit the fire for me to become a college professor. He was a non-traditional professor, coming back to campus after a long career in industry, and his real-world experience set him apart from other professors.

It took a couple of decades before I followed suit, but in 2005, I went back to my undergraduate alma mater as a lowly instructor. Within two years, I was getting excellent course evaluations and even picked up some teaching awards.

Why? Well, one major factor was the 25 years of business experience I brought into the classroom. Instead of just teaching concepts out of a textbook, as so many of my professors had done, I was able to give real-world examples of how the theoretical concepts in the textbook played out in practice.

Students relate better to practical examples than to theory, and my ability to convey them made me a sought-after professor.

When I made the move back to campus, I was in a divisional CFO role with a well-known bank. Needless to say, the salary differential between CFO and college instructor is rather startling, but thanks to my financial advisors and a history of saving first, I was able to make the change without a big lifestyle adjustment. I planned the move over almost a decade and when the time came, I was ready.

Being intentional about finances

Over that decade, a lot of pieces had to fall into place, and it was only by being intentional that I was able to make it happen. First, I had to get my finances in order. It’s not like we were broke or living an overly lavish lifestyle, but my salary initially went down by more than 90%, so having a big savings buffer was essential. From the time we first started working together, I let my financial advisor know my objectives and the impact it was likely to have on my future salary.

“It’s not like we were broke or living an overly lavish lifestyle, but my salary initially went down by more than 90%, so having a big savings buffer was essential.”

Accordingly, she guided me to save a high percentage of my current income and to take less risk in my investments. Every bonus or stock-option exercise went into one of two things: 529 plans for our two daughters or what my wife and I called the “war chest” — our fund for making that transition work.

As most of you reading this are financial advisors yourselves, this experience calls out how essential it is to really listen to your clients and to always have their best interests at heart. Financial advisors with whom I had worked in the past often seemed tone deaf. They were more interested in pushing for returns despite the low tolerance I had for risk given my career objectives.

I also had to build key relationships on the campus where I intended to work — Virginia Tech. I was able to secure an appointment to the Pamplin Advisory Council (PAC), the panel of key external advisors to the dean. In addition, I served on the PAC for almost eight years before leveraging my track record there into getting an interview when a position opened.

I was directly involved in getting my employer, a division of Sara Lee Corporation that is now part of Hanesbrands, to recruit Virginia Tech students. Another key was getting an invitation to guest lecture on campus — and as the icing on the cake, it was in the dean’s own class. That experience not only let me show my potential in the classroom, albeit briefly, but it also confirmed my interest in lecturing on a more regular basis.

If you can see yourself being a professor one day, it’s never too early to start putting things into motion.

The good news is that universities need your knowledge and experience, especially those that offer a CFP or CFA track as an option within the finance major.

You can get your feet wet in a variety of ways. One is to serve as a member of an advisory board to a university. Your alma mater is probably your best option, as alumni advisory boards are quite common. They exist at a variety of levels, from the boards that advise university presidents and deans down to the ones that advise individual departments. They meet only a few times a year, so if you’re no longer living anywhere near your alma mater, the logistics can still be managed.

And if not your alma mater, a university closer to where you live is also a possibility; not every member of an advisory board is an alum.

Another way to get established is to volunteer to be a guest speaker. Many professors love to bring in industry experts to add color to what they’re covering in class. The website SpeakerPost.com, created by my colleague Komal Kapoor, is a great way to get connected to both in-person and online speaking opportunities.

In one of my courses, we had over 30 guest speakers visit on the same day so that the 1,100 students could choose a small group session that best fit their interests. It was quite a balancing act to get everyone to the right rooms at the right time, but it was worth it. Some students came away with contacts they maintained all the way to graduation, and probably beyond.

When you’re ready to try out a whole class, there are often opportunities right there in your own company to allow you to do so. If not, contact a community college to look for a fit. Don’t expect to make much money, but in spite of the lack of cash flow, you’ll get a sense of whether teaching is really for you.

It’s also possible to take an adjunct professor role at a larger school, although having a master’s is usually required to start at these institutions. Adjunct pay typically beats community college salaries, but it’s still not a way to get rich. Remember, you’ll be doing this for the experience, not the money.

In my case, I made the jump more permanently, and that came with some challenges I never anticipated.

While the deans and the department heads usually appreciate the expertise you will bring into their classrooms, don’t expect all your peers to roll out the red carpet for you. In my 15 years in academia, only one tenured professor ever came to me to ask how a particular concept played out in my business career. Some helped me with things that were new to me, like creating grading rubrics, but many ignored me and a few were downright hostile.

Another big limitation for me was not having a PhD. Initially, I didn’t think it would be a problem, as I was promoted from instructor to associate dean in one semester — that’s not a typo. The years I had spent on the PAC had demonstrated my administrative capabilities, and the role of an associate dean was not as big a stretch as it would have appeared.

But after a few years in that role, I wanted to look at other opportunities on the campus, and I found out quickly that not having a PhD was a very limiting factor, especially outside the college of business where I was less known.

I even ran into one case where the hiring manager told me I would be a great fit for an associate vice-president position in his department, until I told him I didn’t have a PhD. I went from great fit to “don’t bother to apply” in less than a minute. 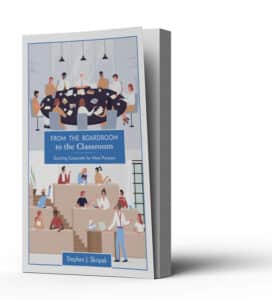 I’ve never regretted my decision to give up the C-suite for the classroom. The benefits far outweighed the cost, which was entirely financial in nature. Over 15 years as a professor, I built countless relationships with many bright and ambitious young people. Seeing their incredible potential and being part of shaping it, even a little, is incredibly rewarding.

It’s impossible to put a price on helping a student find the right path or unlock a concept with which they were having difficulty. Many still keep in touch with me regularly, including some who have been out of college for more than 10 years. Seeing what they are accomplishing and feeling like I had some small role in helping them along the way is one of the most gratifying aspects of having come back to campus.

I think there’s a bit of a teacher in all of us. Do you have what it takes to do it as a second career? If you’re a CFA or CFP, you certainly have the expertise. Combine that with a passion for helping students, and you might be amazed where it could take you.

Stephen Skripak retired as a professor of practice in the Pamplin College of
Business at Virginia Tech. During his 16 years there, he also served as associate dean for graduate programs and MBA director. Previously, Skripak was an executive with Capital One Financial and Sara Lee Corp. He began his career at General Electric. Skripak earned university-level awards for teaching and is a member of Virginia Tech’s Academy of Teaching Excellence. He enjoys outdoor activities, honing his French, and continuing to make a difference in the world. Skripak’s latest book, “From the Boardroom to the Classroom: Quitting Corporate for More Purpose,” was recently published.