WalletHub compared the retirement-friendliness of more than 180 cities across 46 key metrics.

Clients looking for a place to retire may want to consider Charleston, S.C. This southern coastal city ranks No. 1 among 182 locales in WalletHub’s latest “best place to retire” survey released in September 2022.

Charleston — which moved to its current location in 1680 — ranked 21st in affordability, making it much more within reach of retirees than southern cities Miami (78), Fort Lauderdale (87) and Atlanta (49). It also ranked high for activities (15) and relatively well for quality of life (75) and healthcare (48), according to the WalletHub study.

Following on Charleston’s heels in retirement-friendliness are Orlando, Cincinnati and then, despite their lower affordability, Miami and Ft. Lauderdale. San Francisco ranked No. 6 overall, despite a nosebleed affordability ranking of 160. Propelling San Francisco towards the top are its attractive rankings for activities (2), quality of life (22) and healthcare (18).

Although San Francisco remains out of reach financially for many, the city notes its homeless population declined 3.5% between 2019 and 2022.

The cities with the highest number of employees age 65-and-over include Plano and Irving, Texas; Sioux Falls, SD; Burlington, Vt., and Columbia, Md. At the opposite end of this metric, starting in 178th place, are Columbus, Ga.; Peoria, Ariz; Lewiston, Maine; Detroit; and Gulfport, Miss.

Philadephia has the highest number of recreation and senior centers per capita, while Madison, Wisc., and Durham. N.C., have the fewest.

The cities with the highest percentage of the population 65 and over are Pearl City, Hawaii; Scottsdale, Ariz.; Coral Gables, Fla; Warwick, R.I.; and Hialeah, Fla. The city with the lowest population age 65 and over is Laredo, Texas.

For clients looking for culture, Washington D.C., St. Louis and San Francisco tie — followed by Atlanta and New York City. The best city has 80 times the number of museums than the worst city in this category, Port St. Lucie, Fla., according to WalletHub data.

At the bottom of the list for retirement-friendliness: Newark, N.J. and Bridgeport, Conn.

The biggest mistakes people make when planning for their retirement are failing to think of building with a purpose or a vocation and not taking into account driving proximity to their family (or airport convenience), Jacquelyn Kung noted in WalletHub’s study. Kung is CEO of Senior Care at Activated Insights and a Fellow in the Health and Aging Policy Fellows Program at Columbia University Medical Center.

WalletHub compared the 150 most populated U.S. cities, plus at least two of the most populated cities in each state. Its analysis assumes retirees will rely on a fixed income. 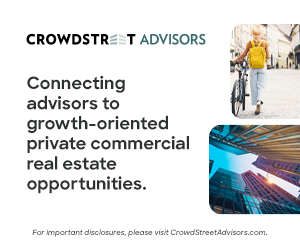 The SEC charged the broker-dealer firms with violating recordkeeping provisions of the federal securities laws.

The use of these deceptive design practices is on the rise, says a new FTC report that shows what to watch out for.

Bridgewater’s Dalio Expects Stocks To Fall 20% If Rates Rise To 4.5%

The founder of one of the world's biggest hedge funds predicts a sharp plunge in stock markets as the Fed raises interest rates.

Speakers at the SALT event urged investors to stick with their bets, arguing the downturn could become a money-making opportunity.